Brown Latino KKK Says You are Too White To Be American

Americans First in America
You dont need to Join any Group to see what this is on your own!

Brewer to Obama: Warning Signs Are Not Enough

New Strategy Prioritizes Immigration Enforcement Actions Against Convicted Criminal Aliens in Virginia Before It's News
Posted by AmericansFirstAmerica at 6/24/2010 05:40:00 AM No comments: 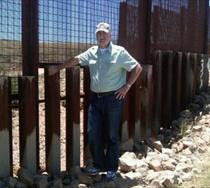 Local Sheriff Witnesses Arizona Immigration Issues - Cincinnati breaking news, weather radar, traffic from 9News Channel 9 WCPO.com
COCHISE COUNTY., Ariz. -- Butler County's Sheriff and a key state legislator are far from home looking for evidence and support for a tougher immigration law in Ohio.Sheriff Richard Jones and State Representative Courtney Combs (R-Butler County) are in Cochise County, Arizona on the border with Mexico.In a telephone interview with 9 News, Sheriff Jones said he could see the evidence at the border having witnessed videos of illegal immigrants crossing it within relatively close proximity to a Border Patrol station.Jones and Combs want Ohio to pass a law similar to Arizona's. That law gives local law enforcement officers the right to ask a suspect for proof of U.S. citizenship and allows them to enforce federal immigration laws.Jones says the illegal immigrants crossing the border in Arizona are not staying there. He says many of them are criminals and they are bringing crime to Ohio.Jones is not optimistic that the Ohio legislature will pass the anti-illegal immigration law he wants. That's why he is also supporting a push to put it before the voters in a statewide referendum.

William Gheen And ALIPAC - The Phoenix Shall Rise - Beginnings by Diggers Realm (click above banner for full story)
While most of the nation is focused on methods to "unite" to stop the largest invasion in world history, ALIPAC's William Gheen has repeatedly attacked, undermined, and impuned the efforts of others, with little regard for the facts or the truth, taking credit for anything and everything that grassroots Americans have endeavored to accomplish for the common good. Dan Amato of Diggers Realm has chronicled what actually transpired during this latest outrageous intolerable act by ALIPAC's William Gheen.
P.T. Barnum was credited with saying "There's a sucker born every minute." Apparently, William Gheen of ALIPAC has taken that adage to heart, and adopted it to justify any action he chooses to take. From my experience, if Mr. Gheen cannot either take credit for, control, or profit from actions that other patriotic Americans are engaged in, that he systematically tries to destroy the event, discredit its organizers, and make himself the victim, with little to no regard for the truth, all the while claiming some self-righteous responsibility to "police" the anti-illegal alien invasion cause. He should be policing his own behavior.

Recently, Mr. Gheen lashed out at some of the hardest-working patriots in the cause, including The Rocky Mountain Foundation founder, former Congressman Tom Tancredo, and Voice of the People USA founder, Daniel Smeriglio, calling them neo-Nazi supporters. The truth has set Mr. Tancredo and Mr. Smeriglio FREE!

I most strongly encourage anyone who wants the facts to read the detailed account prepared by Mr. Dan Amato of Diggers Realm below, and make your contributions in the future to groups who aren't poison to the cause.
Whether it is Mr. Gheen, or others inside-and-outside the Beltway, I am disgusted by carpetbaggers and profiteers who "claim" they want to solve these problems all the while filling their pockets, drawing fat salaries, and undermining the efforts of the TRUE sons and daughters of liberty! Read what former Congressman Tom Tancredo had to say about Mr. Gheen's ridiculous allegations:
"I am proud to be participating in the June 5 rally at the Arizona state capitol in support of Arizona's new law aimed at illegal immigration, SB1070. The allegations against one of the rally's organizers, Daniel Smeriglio, have been examined and are not only without merit, they are the worst kind of character assassination that no decent person in politics, left, right or center, should condone. One can only speculate about the motives behind this transparent smear campaign." -Tom Tancredo

I could add MANY examples that illustrate the exact same pattern of intolerable acts, and attacks against this PatriotWatchdog, the FIRE Coalition, its partners, and numerous others for years, but will refrain for now, as Digger's stellar work speaks for all of us.

On May 4, 2010, Mr. Smeriglio and I both attended a press conference in the Pennsylvania Capitol Media Center with Rep. Daryl Metcalfe and others as they announced the introduction of HB-2479, the Support Our Law Enforcement and Safe Communities Act. HB-2479 mirrors Arizona's SB-1070. Rep. Metcalfe is the founder of the State Legislators for Legal Immigration Coalition, with members from 36 state legislatures across the country, including AZ State Senator Russell Pearce, the prime sponsor of SB-1070. You can view the PA press conference at the SLLI site, and read my formal remarks here.

I encourage those of you who are able to attend and/or support the efforts of the June 5, 2010 Phoenix Rally to do so. I am also pleased to announce Mr. Daniel Smeriglio is the new Pennsylvania Director for the FIRE Coalition, and will be representing our support at the Phoenix Rally. Mr. Smeriglio will be speaking at our Ohio conference on June 19, 2010. I would be there myself, but the FIRE Coalition is holding our first National Security Conference of 2010 the day before in Topeka, Kansas, and two weeks later in Hamilton, Ohio.

If you cannot make the Phoenix Rally, please consider attending/supporting one of the below FIRE Coalition and Patriot Coalition National Security Conferences coming up. Click either banner below for more information.

Be wary of huskters and political hacks who talk the talk, but don't walk the walk. Restoring Constitutional governance is everyone's responsibility. Attrition through enforcement of our existing laws works. The illegal alien foreign national invasion of America must end, our borders and ports of entry must be secured. Legal immigration levels need to be both merit-based, and reduced to levels that are in the best interest of the American people. National security truly begins at home. Knowledge is power. Get informed and get involved. The country you save should be your own!
"To a Patriot, Defending Life and Liberty IS the Pursuit of Happiness."
-PatriotWatchdog founder & FIRE Coalition National Director, Jeff Lewis
Posted by AmericansFirstAmerica at 5/24/2010 02:58:00 PM No comments: